Manually disable 5 out of 8 nuclear missiles 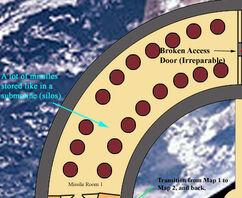 Manually disable 5 out of 8 nuclear missiles (Missile Room 1) was going to be a quest in Van Buren, the canceled Fallout 3 by Black Isle Studios. It was located in B.O.M.B.-001.[1]

The player has the option of disabling the launch doors for the eight nuclear missiles in Missile Room 1 before meeting up with Presper and his crew. However, the player would need to get the Missile Room 1's access codes before doing so. The player may get the codes from Alpha or the central computer in the Living Quarters. Once inside, the player, using a manual crank, can set the missile doors to "lock," which will prevent the missile doors from opening during launch. Each missile will take about 10 minutes to disable (a lot of cranking – so fade out, fade in)[2]. Once the missiles start launching – the missiles on the Command Center side are the first to launch – an emergency light and alarm will click on giving a warning that the station's structural integrity is collapsing (a result of five missiles firing their engines but have nowhere to go). This gives the PC one minute to get out of Dodge before B.O.M.B.-001 lights up the night sky.

This quest will set in motion the actual end-game.

Retrieved from "https://fallout.fandom.com/wiki/Manually_disable_5_out_of_8_nuclear_missiles_(Missile_Room_1)?oldid=3267560"
Community content is available under CC-BY-SA unless otherwise noted.