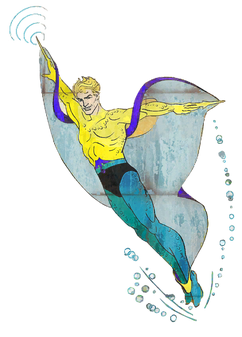 Manta Man is a fictional character in the Fallout world and the protagonist of the Manta Man franchise.

Manta Man is a fictional character created by Hubris Comics. He is depicted wearing a skin-tight orange top and green pants, with a blue cape. He is occasionally shown equipped with wrist-mounted blades. Based on his name and the names of his comic book issues, he appears to have water-themed superpowers. According to a delusional wastelander who assumed the identity of Manta Man, the plot of the final released issue of the comic involved Manta Man's mysterious evil twin brother. However the issue ended on a cliffhanger and the Great War prevented the conclusion, leaving the true identity of the brother a mystery. [1]

Manta Man's costume can be purchased from the Atomic Shop in Fallout 76 for 800 Atoms.

Manta Man is mentioned in Fallout 3, Fallout 4 and Fallout 76.

Manta Man is based on the DC Comics superhero Aquaman. 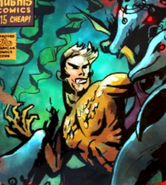 Manta Man on the cover of Unstoppables: Commie-Kazi VS. Manta Man

Manta Man on the cover of Unstoppables: Trapped in the Dimension of the Pterror-dactyls!

Manta Man on the cover of Unstoppables: Visit the Ux-Ron Galaxy!

With the crew
Add an image to this gallery

Retrieved from "https://fallout.fandom.com/wiki/Manta_Man_(character)?oldid=3256010"
Community content is available under CC-BY-SA unless otherwise noted.