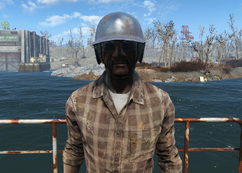 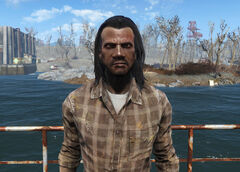 Without his helmet and goggles

Manta Man is a delusional would-be vigilante wandering the Commonwealth in 2287.

Manta Man is a wastelander who believes himself to be the Hubris Comics superhero of the same name, traveling the Commonwealth to fight evil.

He can be found fighting three mole rats as part of a random encounter after completing The Silver Shroud.

If the player character is dressed as the Silver Shroud, he will be refered to by Manta Man as such, and talks/acts similar to them and how they can "talk" like the Silver Shroud during certain dialogue options; most notably when talking to Hancock in-character.

Manta Man appears only in Fallout 4.

Retrieved from "https://fallout.fandom.com/wiki/Manta_Man_(Fallout_4)?oldid=3178330"
Community content is available under CC-BY-SA unless otherwise noted.