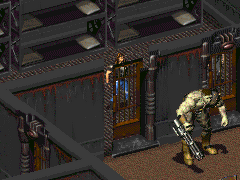 “Lived here all my life. That's how I know all the bad stuff that goes on here. That's why I know how evil the mutants all are. It's a good thing there are some of us who see the truth.”— Manson

Manson is one of the inhabitants of Broken Hills in 2241.

Manson claims to have been named by his parents after Charles Manson, a pre-war cult leader and criminal, and is every bit as insane as his namesake. He is one of the members of the anti-mutant conspiracy and thus is held in the local jail together with his friend Franc.

When talking to Manson and asking about Broken Hills there may be an long dialogue option in where he responds with "Wha'?", this gives 300 XP. The dialogue requires high Intelligence, at least 7, to be available.

Manson appears only in Fallout 2.

Retrieved from "https://fallout.fandom.com/wiki/Manson?oldid=3345389"
Community content is available under CC-BY-SA unless otherwise noted.