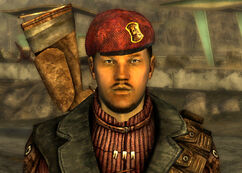 Sniper
2 of Hearts (with Boone) 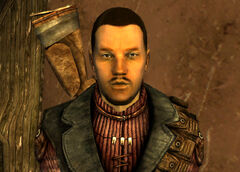 Manny without his beret

“Man, you name it. See, I grew up in North Vegas. Me and my cousins. We were some bad seeds. Got in with a gang. I loved it. Then something happened, and I couldn't handle it anymore. So, I enlisted. Earned my future. Brought down my best friend to share that future with me. And here was this woman who was too good for it, trying to take him away. So yeah. I didn't see eye-to-eye with the bitch.”

Manny Vargas is a former Great Khan and retired NCR soldier living in Novac in 2281.

He is one of the two former NCR 1st Recon snipers who are now sentries in Novac. He and Craig Boone alternate shifts in Dinky the T-Rex's mouth. Born in North Vegas, Manny grew up with his cousins, and eventually joined the Great Khans with them. Then "something happened" (Manny doesn't specify what) and he decided to leave. He enlisted in the NCR military and was recruited into 1st Recon, becoming Boone's spotter and best friend.

Being a former member of the Great Khans, he made it a point to be absent when 1st Recon was deployed to rout out the gang at Bitter Springs. Even though he wasn't at the battle of Bitter Springs and harbors no ill will towards the NCR, it was the reason he didn't re-enlist; if asked, he says "it did take something out of it for me. Just wasn't the same." After retiring, he convinced Boone and his wife to move to Novac. Carla hated Novac, and she and Manny didn't see eye-to-eye on anything. When Carla disappeared, Manny was the first person Boone told, but Boone ended their friendship after seeing that Manny was glad.

Manny, together with Boone on the playing card
Add an image to this gallery
Retrieved from "https://fallout.fandom.com/wiki/Manny_Vargas?oldid=3124404"
Community content is available under CC-BY-SA unless otherwise noted.