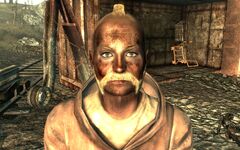 “These green bastards seem to be on the move. You never hear 'em talk about it, but they are looking for something. And people. Anyone they can get their hands on.”— Manny Koch

Manny Koch was the leader of a search party that set out from Canterbury Commons to look for Cheryl in 2277.

The leader of the Canterbury Commons search party that attempted to locate the whereabouts of his sister, "Cheryl," Manny Koch is the only visible remains of the group; the rest are either buried, chopped into manageable pieces and stored on gore bags, or gone. Manny is dead when the Lone Wanderer approaches him. After inspecting the body, one should prepare for a super mutant behemoth.[1]

Manny Koch had searched for Cheryl and their dog Myles from the Citadel to Calverton with the search party he organized: Henry, Emmet, and Kaya.

Manny appears only in Fallout 3.

Retrieved from "https://fallout.fandom.com/wiki/Manny_Koch?oldid=3230302"
Community content is available under CC-BY-SA unless otherwise noted.