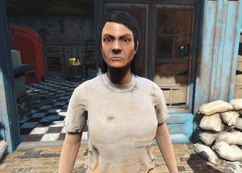 Mandy Stiles is a scavenger in the Commonwealth in 2287.

As part of a scavenger group making camp to the west of the USS Constitution, Mandy is intent on taking the ship along with Davies to salvage it for parts, which would keep herself and the crew from "scrounging in the gutters. Ever."

Although there is no official leader of the group, Mandy acts the spokesperson for the group when dealing with the Sole Survivor, shutting Davies down when he complains about having to share the salvage with the player character and distancing themselves from the previous group to assault the ship.

Mandy Stiles appears only in Fallout 4.

Retrieved from "https://fallout.fandom.com/wiki/Mandy_Stiles?oldid=3355397"
Community content is available under CC-BY-SA unless otherwise noted.