Jewel of the Commonwealth
The Sight

Public Defender
“Mama Murphy's good as her word, kid. No more chems. And no more Sight either.”— Mamma Murphy

Mama Murphy is a chem-addicted fortune teller, traveling with Preston Garvey and his group of settlers in the Commonwealth in 2287.

"Mama" Murphy is an elderly seer specializing in "The Sight," a supernatural power that she claims is sourced from chems. She takes the drugs to utilize psychic powers to predict the future.[1] Hailing from Quincy, she left the town with Preston Garvey and the 20 remaining settlers when it was assaulted by mercenaries when one minuteman in particular betrayed the rest. She and the refugees were holed up in the Museum of Freedom when they were ambushed by Jared's raiders from Lexington, led by Gristle, as they passed through Concord. She can be found with the last of the survivors on the upper floor of the museum.

According to her, she was once a strong and ruthless fighter, very muscular and specialized in unarmed combat. She claims that she once ripped the head off of a raider using just her bare hands, earning her the nickname "Murphy the Madwoman."[2]

Mama Murphy uses chems to induce a trance-like state in which she claims to see "things that were, things that will be, and even some things that are, right now." She uses her power out of a desire to protect the people she cares for, providing warnings of danger and advice on which courses of action to take. 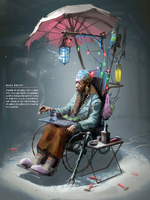 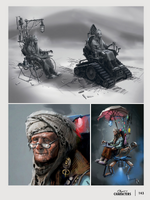 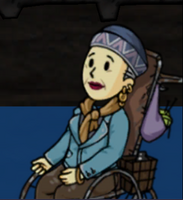