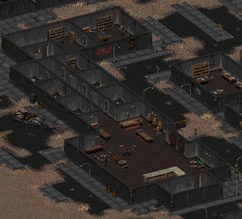 Dispose of merchant
Dispose of Jain
Take down Decker

The Maltese Falcon is the Hub Downtown's local bar and flophouse. It is run by Decker, the head of a criminal organization named the Underground and after his death, by the Hub police.

The business used to be legit but after the former owner refused to sell to Decker, they disappeared. Now the bar is a cover for his operations in the area.

Decker's death is the knell of the Underground - his absolutist control of all criminal activities within the city means that there is no one to succeed him. The Hub police can easily pick off any criminal elements without fear of retribution and the Maltese Falcon is now owned by the Hub police.

The two main doors open into the entryway. On the left is the bar where drinks are served, with a number of armchairs next to it. The bar serves:

On the right is the casino area, where anyone can play gambling games. On the bottom right, there are six brothel rooms and two prostitutes, but the Vault Dweller cannot have relationships with them or sleep in the rooms.

On the wall behind the bar on the right, Kane guards a door that leads to the Underground's hideout in the basement. If Decker is dead, the basement is still open, but there is nothing interesting inside.

The gambling area is similar to a casino but uses caps as currency.

The Maltese Falcon itself appears only in the first Fallout, although it also appears in Fallout 2 as the Café of Broken Dreams special encounter. It is also mentioned in the Fallout Bible.

Retrieved from "https://fallout.fandom.com/wiki/Maltese_Falcon?oldid=3169990"
Community content is available under CC-BY-SA unless otherwise noted.