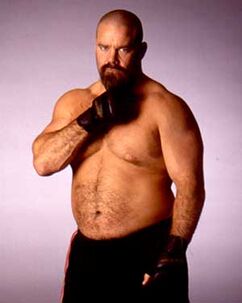 Mallet McBride is one of the escaped convicts of Tibbets Prison in 2253.

Mallet McBride is not a nice man. In fact, he's a downright asshole. If it weren't for the fact that Mallet was in prison for carrying Limit 115, he would be either in someone else's prison or dead from a gunshot wound to the head. However, now that he escaped Tibbets Prison, he has chosen Hoover Dam as the place to sow his wild oats.

Mallet is a pretty big guy and a very skilled unarmed fighter. He's so good, in fact, that legend has it he once laid out a super mutant with one punch, though that legend has never been tested on Beatrice. Mallet hangs out in Dusty's Desires and whittles the day away getting drunk and boozing it up. He takes the occasional caravan job with Crimson Caravan to earn enough money to continue his boozing and carousing, but he does not have any loyalty to them.[1]

Mallet McBride was to appear only in Van Buren, the canceled Fallout 3 by Black Isle Studios.

Retrieved from "https://fallout.fandom.com/wiki/Mallet_McBride?oldid=3449260"
Community content is available under CC-BY-SA unless otherwise noted.