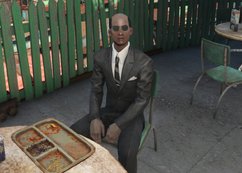 Malcom Latimer is a wealthy resident and an associate of the Triggermen living in Diamond City in the Commonwealth in 2287.

Malcom grew up a poor, lower class Diamond City resident.[1]. Being forced to turn to crime due to his circumstances, he eventually met Paul Pembroke and Henry Cooke. Together, they orchestrated a massive heist on Marowski in 2267, who was back then the most powerful drug kingpin and crime boss of the Commonwealth.[2] A warehouse full of chems belonging to Marowski was stolen by the gang, dealing a massive blow to Marowski's drug empire. Marowski, despite putting up a huge bounty on the heist perpetrators, never knew who their identities were.[3]

Meanwhile, Malcom, having gotten very wealthy from the spoils of the heist, decided to settle down in Diamond City with his fortune, investing it on a number of businesses. Over the years, Malcom would go on to become one of the richest and most powerful residents in Diamond City, in his own words, "practically running Diamond City" by paying Mayor McDonough into doing his bidding.[1]

Malcom Latimer has a son, Nelson Latimer. He can be found outside of the Colonial Taphouse during the daytime or might approach the Sole Survivor at the center of Diamond City near the chapel.

Malcom Latimer appears only in Fallout 4.

Retrieved from "https://fallout.fandom.com/wiki/Malcom_Latimer?oldid=3489947"
Community content is available under CC-BY-SA unless otherwise noted.