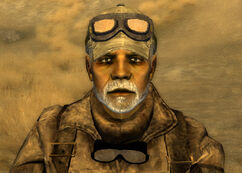 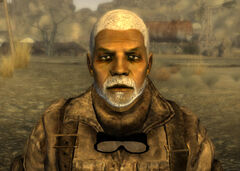 Malcolm Holmes was a collector of star bottle caps to get the treasure that's hidden in the Sunset Sarsaparilla headquarters building. He claims to have retired from collecting the caps, but if the Courier pickpockets him (or kills him), they will find up to six star bottle caps in his inventory. Holmes also warns that there are people willing to kill for the blue star caps, including someone named Allen Marks.

The Legend of the Star: Sometime after the player character has picked up their first star bottle cap, they will encounter a man who claims he has been following them. Holmes approaches and introduces himself as a retired trader who noticed they had the same interest in the bottle caps that he collected long ago. He also mentions that if enough caps are collected, the treasure can be claimed from someone named Festus.

Malcolm's chest will sometimes be invisible when he initially approaches you. Simply loading from the last save fixes this.

Retrieved from "https://fallout.fandom.com/wiki/Malcolm_Holmes?oldid=3296827"
Community content is available under CC-BY-SA unless otherwise noted.