Radscorpion Poison antidote
250 XP
“They seem to be sensitive to light. Nocturnal. If I could get a sample of their poison, especially the venom production sac located in their tail, I could create an anti-venom.”— Razlo

Make Poison Antidote is an unmarked quest in Fallout.

To complete this quest, the Vault Dweller needs to give Razlo a radscorpion tail.

Talk to Dr. Razlo and there should be an option to give him the scorpion tail. In return, Razo will provide a poison antidote and 250 XP.

For extra experience, the player character can go behind the curtain in Dr. Razlo's house to find a man laying on a futon, then hold the mouse button and select the bag icon to open the inventory. Click on a bottle of antidote to use it on the man, who is named Jarvis. Jarvis is the brother of Seth, the captain of Shady Sands' guard. Jarvis was poisoned by a rad scorpion, and if healed, the player character will receive 400 XP.

If the Vault Dweller is low on health after fighting the radscorpions, there is a way to receive free healing instead of wasting stimpaks, by talking to Dr. Razlo (before giving him the tail) and asking to be healed. He will give a price for his services. If the player character refuses to pay for his medical services, they should be able to offer him a radscorpion tail instead of money. By doing this, the player character will be healed to full health for free, while also giving the antidote and 250 XP. He'll even do this at night. 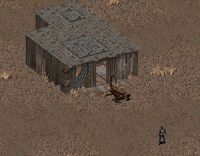 Or that if you're (un)lucky (random encounter).