Maize is a consumable item in Fallout: New Vegas. It can be obtained by harvesting a maize plant, buying it from merchants, or finding it in certain locations.

A consumable found growing on stalks throughout the Mojave Wasteland and surrounding regions. Farmers are able to grow maize despite the desert environment and Freeside residents mention it as being a part of their diets.[1][2]

Maize can restore Hit Points with no radiation damage. It is one of the few edible food items that does not give any radiation, besides other fresh fruits or vegetables and food found in the non-compromised vaults. Additionally, in Hardcore mode, it can reduce Starvation and Dehydration.

Maize is one of the most efficient Hardcore mode food items in the game in terms of Starvation to weight ratio, should the Courier have low Survival skill. It reduces Starvation/Dehydration more significantly than other food items, contains zero radiation, is commonly found, and only weighs a quarter of a pound. Maize can be used to craft homemade flamer fuel, Cass' moonshine and mole rat stew.

A miniature version of maize can be found in the Ultra-Luxe kitchen. 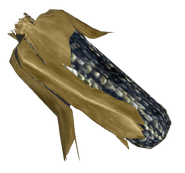 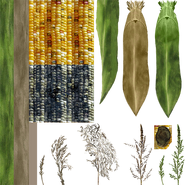