Mothership Zeta
“Yeah, it is kinda stinky in here... Did you cut the cheese?”— Sally

The maintenance level and the connected waste disposal are locations onboard Mothership Zeta in 2277.

If the Lone Wanderer uses the teleportation matrix, next to the door to robot assembly, to the maintenance level during Among the Stars, they will find Sally attempting to fix the control panel on a Zeta trash can. She explains that she is not really lost and they both might find 'something neat'. Before long though, it starts moving, and it's a long way down...

The trash can stops at several levels of the Zeta Mothership, a small hatch to the player character's right (when facing Sally) opening for them to look and shoot out:

The elevator will stop on the last level and involve a shoot-out with the three aliens. Sally will then climb out of the compactor, explaining that she will figure something out to get it moving again. The trash compactor will then suddenly plummet. A first person view of the player character will show them scrabbling for grip inside the compactor, ultimately failing, and landing in a detritus ridden area with a newly crippled leg.

Sally then re-appears, and one can tell her they wish to go back the way they came but she will explain that is impossible unless the player character is "Captain Cosmos". Sally runs off after deciding to split up, explaining that she will "try to find a way to get you out of there."

Inside, the player character will find a maze of trash compactors. One situated ahead, can be turned on and off and one will find it proves quite adept at destroying anything the player character places in its path. To the lower east of this room is a grid of trash compactors, examine the rhythm or run through to two safes (one hard, one very easy) containing caps, ammunition and chems, and a first aid box.

Another maze of tubes and trash in the next room and Sally's voice emanates. In here there is a first aid box and a safe. If the player character did not heal themselves of the cripple earlier, there is a healing archway in this tunnel. Exit the door to find a support drone clearing garbage.

Above the drone, there are two aliens on the roof who will ambush the Lone Wanderer from their back when they enter a U-shaped walkway in the outer room. After defeating them, the player character can also find a military footlocker, which contains the unique item General Chase's overcoat, at a corner near the beginning of the walkway (map location A). At the end of the walkway, there is a door. When the player character passes it, two aliens will run from the tunnel (where the healing archway is), one of whom wields an inertia suppression field.

The next room will contain 2-3 aliens who drop down from a rampway above, unless the player character is adequality stealthed. Dispatch these somehow using the trash compactor, or just kill them, and Sally will have opened doorway 2.

The next few rooms will be closed off similarly (all of these upper areas can be accessed by stacking the small boxes beside a doorway to make a set of stairs and leaping from the top of the doorway arch before sliding off the other side). The player character must wait a few seconds, possibly dispatching the aliens if spotted. Once through, Sally reports the radio has gone quiet, and they are ambushed in the next room. Grab alien captive recorded log 19 in here and kill all aliens until the doorway opens. There are also containers in this room.

Once through, travel through the next area and meet Sally. She tells the player character to check out the storage closet which contains a samurai's sword (map location B) and loads of first aid boxes. She then tells them to return to the core and '..never speak of this again.'

Maintenance level and waste disposal appear only in the Fallout 3 add-on Mothership Zeta. 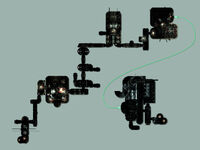 Stop on the way down on maintenance level