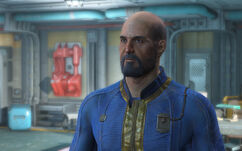 Maintenance Man is an unmarked quest in Fallout 4.

After a brief conversation with Calvin Whitaker, he will buy any tools from the Sole Survivor for 15 caps a piece. The tools he seeks include:

Calvin will not buy any other tools from the Sole Survivor, even ones that would seem to make sense, like gardening tools and cleaning tools and some uncommon hammers.

Retrieved from "https://fallout.fandom.com/wiki/Maintenance_Man?oldid=3416903"
Community content is available under CC-BY-SA unless otherwise noted.