The main battle tank[2] is a vehicle used by the United States Armed Forces before the Great War.

Altogether, the tank weighed over sixty tons, making it unusable in marshlands and other soft terrains, despite the reliability that allowed for a single soldier to hotwire them and restore them to working order.[4] The armor of the heavy tank unusually uses riveted steel which actually increases spalling in the cabin from hits. It has no visible secondary armament. The powerplant is an equally heavy-duty nuclear engine, with it back pods allowing for the exposure of heat sinks for quick air cooling while stationary.[3]

The tank near relay tower 0BB-915 has become stuck in rough terrain, as evidenced by a handful of skeletal soldiers with shovels. A nearby note indicates that the tank was taken for a joyride by a group of drunken soldiers immediately prior to the Great War.

The tank appears in Fallout 4 and Fallout 76.

The heavy tank was modeled by Tor Frick[5] and implemented by Lucas Hardi.[6] The tank itself is modeled after the M46 Patton tank.[3]

One of the four tanks inside the Fort Hagen hangar

Yardstick measurements
Add a photo to this gallery

At the converted munitions factory

Along the Ohio River

An 18-carat run of bad luck

Original render before being converted into an in-game asset 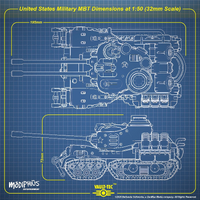 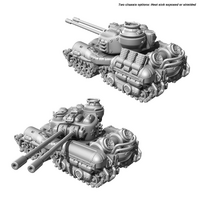 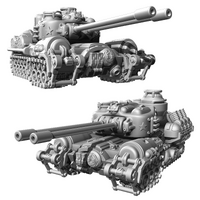 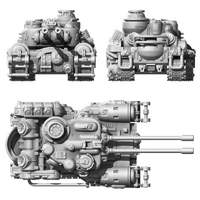 Retrieved from "https://fallout.fandom.com/wiki/Main_battle_tank?oldid=3499361"
Community content is available under CC-BY-SA unless otherwise noted.