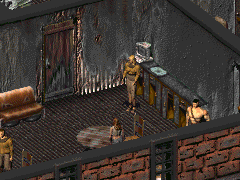 “-Well, I didn't count tribes when you asked about civilized towns. But I guess there's a group of savages somewhere to the northwest -- and then Sulik's tribe, far to the southwest.
- That's funny, my tribe doesn't count pre-war towns when we talk about civilized places.”— Maida and the Chosen One

Maida Buckner is a resident of Klamath and merchant in 2241.

Maida is a plain looking, sturdily built young woman with a scowl on her face.[1] She is the daughter of Ardin Buckner and a member of the Buckner family of Klamath. Maida has a store with various items (mostly leather armor, first aid kits, knives etc). While she says she will give a good price for gecko pelts, her prices are no different to the other merchants in town.

Maida Buckner appears only in Fallout 2.

Retrieved from "https://fallout.fandom.com/wiki/Maida_Buckner?oldid=3283661"
Community content is available under CC-BY-SA unless otherwise noted.