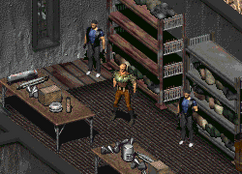 “We are mainly fishermen and scientists. Our fishermen catch fish. Our scientists are working on a project that they say will change the world.”

Mai Da Chiang is the Chinese proprietor of the Red 888 Guns in San Francisco in 2241.

With what seems to be perpetual overdrive[1], he speaks faster than a Vindicator minigun that is in his stock and sells high-end weaponry, from the aforementioned heavy weapon and its peers to the venerable M72 Gauss rifle.

Any money he has can be stolen from him.

"Mai Da Chiang", when pronounced in Chinese-English pinyin, can be translated to either 'buy big guns' or 'sell big guns', depending on the tone used.

Retrieved from "https://fallout.fandom.com/wiki/Mai_Da_Chiang?oldid=3159312"
Community content is available under CC-BY-SA unless otherwise noted.