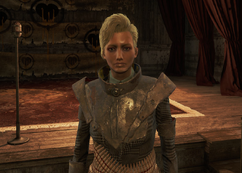 “Nuka-World is a trap for fools - and an opportunity for those who recognize it.”

Maggy Black, "Mags," originally hails from Diamond City, together with her brother William, and Lizzie Wyath. All three were part of the prestigious upper-stands families in Diamond City but were disowned and exiled in the wake of a series of events that brought shame upon her family name.[1] Her mother subsequently demanded she comply with the citizens' request for exile and informed her that she would no longer support the group financially. Mags replied to her mother that she would be taking her inheritance, and that her mother could do nothing to stop her.[2]

Retrieved from "https://fallout.fandom.com/wiki/Mags_Black?oldid=3456863"
Community content is available under CC-BY-SA unless otherwise noted.