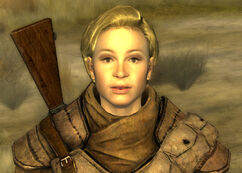 No, Not Much
Flags of Our Foul-Ups

“Yeah, right. You think Poindexter doesn't have a dozen of his crazy practical jokes all lined up if I try that? I like my underwear to *not* be full of radioactive itching powder, thanks.”

Mags is the squad leader of the Misfits, living in Camp Golf in 2281.

A New Reno native, Mags left the city to make something of herself in the ranks of New California's military. She initially joined the New California Republic Army to become a Ranger and become the best of the best, but she did not make the cut and got thrown in with the others who washed out.[1][2] Even in the regular NCRA, she was stationed with the Misfits, who she has absolutely no faith in.[3][4] Regardless of what she thinks, she doesn't tend to lead by example and places the blame squarely on her squad mates.[5][6] She has become increasingly bitter of being stationed at Camp Golf, as according to her, "assignment [there] is a career ender."[7]

Retrieved from "https://fallout.fandom.com/wiki/Mags?oldid=3171370"
Community content is available under CC-BY-SA unless otherwise noted.