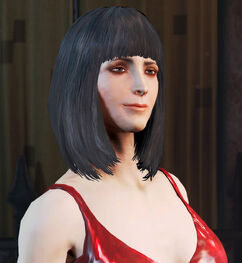 Magnolia is a singer performing at the Third Rail, a bar in Goodneighbor in 2287.

Magnolia is a synth vocalist living in Goodneighbor. She was hired by Whitechapel Charlie to perform at the Third Rail as a source of live entertainment for bar patrons sometime before 2287. The songs Magnolia writes hint towards her past life, which she will mention if asked to comment. She claims that everyone comes to the bar to drown their memories.

At some point after the Sole Survivor first passes through Goodneighbor, Magnolia gives permission to Diamond City Radio to broadcast her songs on the air.

The dialogue just before this check reads: "Now there's something special about you, isn't there. Don't tell me, let me guess."

Magnolia appears only in Fallout 4. 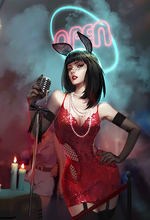 Magnolia's maxed hero card in Fallout Shelter Online
Add a photo to this gallery
Retrieved from "https://fallout.fandom.com/wiki/Magnolia?oldid=3430943"
Community content is available under CC-BY-SA unless otherwise noted.