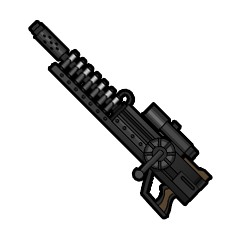 “Magnets + Science! = Killing just about anything! No really, anything.”— In-game description

The Magnetron 4000 is a weapon that appears in Fallout Shelter.

The Magnetron 4000 is a coil gun featured in Fallout Shelter that fires shards of metal at high speeds using magnetic coils that are powered by microfusion cells. Dealing a minimum of 16 damage per attack, it has the highest damage output for a projectile-based rifle in the game.

A high Perception statistic is needed to effectively create the Magnetron 4000.

Magnetron 4000 card
Add a photo to this gallery

Retrieved from "https://fallout.fandom.com/wiki/Magnetron_4000?oldid=3100574"
Community content is available under CC-BY-SA unless otherwise noted.