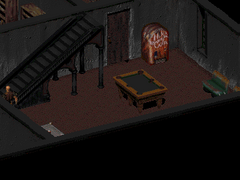 Pick up the 8-ball from this table.
“This black sphere is some strange precognitive device... a small window on the top seems to be able to predict the future! Pre-war humanity must have been geniuses to invent such a wonder!”

The magic 8-ball is a miscellaneous item in Fallout 2.

Sometimes it is almost impossible to decide the correct course of action. With this potent prognosticator, decisions are easy. A truly lucky character may receive some special insight from the magic 8-ball.

Using the 8-ball displays vague (if promising) "fortunes," similar to those on real world magic 8-balls popular in the 1970s. Rarely, the player character will instead receive a clue to various secrets in Fallout 2. In many cases, knowing the location of the secrets is not enough; until the player activates the clue from the 8-ball, the secrets don't actually exist. None of this type of secrets offer rewards that can't be missed, other than maybe the secret password to the computer.

The magic 8-ball can be retrieved from the empty pool table on the second floor of the Bishops' Shark Club, just near the stairs to the 3rd floor.

With Luck of 9 or higher:

It seems that Feargus and Scotty did win out in the end; the older version of the 8-ball's dialogue mentions it being used as a weapon. It cannot be used to throw or punch now, though.