Something Sentimental
A Colossal Problem

Helps Friends and Allies
“Yup. Born and raised in that dying mining town. I was glad to leave that shithole, especially after what happened to my pops.”— Maggie regarding Monongah

Maggie "Mags" Williams is a settler living in the Appalachian town of Foundation.

Maggie was born and raised in Monongah by her father Earle, with her mother, a suspected chem addict, leaving the family early on.[1][2] She gave her father a pocket watch with "Love you Pops ♡ Mags" engraved on it. The watch had a photograph of Maggie and her father inside and he always kept it with him.

After her father and some of his miner colleagues got trapped inside Monongah Mine, due to Deke Sykes blowing up the entrance in January 2076,[3] she tried to gain entry to the mine to search for her father, but was unsuccessful due to too much rubble being in the way. She was told by the workers that her father was somewhere else, although she did not entirely believe them and suspected the workers were paid by Hornwright Industrial to keep silent or the company didn't want to deal with the expenses of a rescue mission. With no one offering to help her clear the rubble just to make sure anyway, Maggie clawed at the rubble until her hands bled, but she was forced to be escorted away and all she could do was hope that the workers were being truthful.[4]

Two and a half decades later, Maggie resides in Foundation and wishes to find closure on her father. She accepts that her father must be dead from either starvation or radiation, although hopes he did not suffer in his final moments. 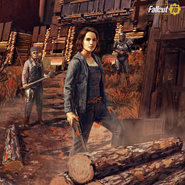 Maggie on the Steel Dawn art