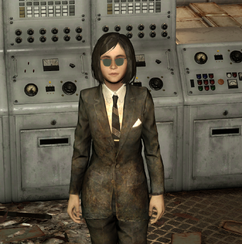 Magdalene[2] "Maggie" Stern, called Pita (Pain in the Ass) by her peers, is an underage Secret Service agent living in Vault 79 in Appalachia in 2103.

Maggie Stern is the daughter of Mercedes Stern. She was born of an unintentional pregnancy in Vault 79, though the father has not come forth to claim her. Instead, the male agents all stepped up to co-father the child, each pitching in their own way to help raise her, using caring for the females as a way to come together and cope.[3] Maggie was raised to become a child agent, while also developing a rude attitude, earning her the nickname of "PITA" (short for pain in the ass).[4] She claims to have training in shooting firearms and to have her own personal silenced 10mm pistol with a light frame and short barrel, with her mother wanting to give her a calibrated .44 pistol with a short scope and comfort grip for her birthday.[5]

Born after Shorty's mutiny,[6] Maggie had not experienced any major conflict until recently when the vault reactor malfunctioned, causing most agents in the vault to either die or become feral ghouls. She, her mother and a few other agents managed to lock themselves in part of the vault, though they are running out of supplies and will perish without rescue.[7]

Maggie Stern appears only in Fallout 76, introduced in the Wastelanders update.

Retrieved from "https://fallout.fandom.com/wiki/Maggie_Stern?oldid=3451274"
Community content is available under CC-BY-SA unless otherwise noted.