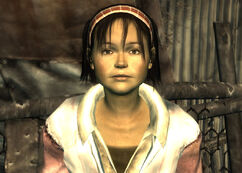 “I probably shouldn't be talking to you. Billy says I get too friendly with people I don't know. He says it's dangerous.”

Maggie is a Megaton resident in 2277.

Maggie was born in 2268. Billy Creel took in Maggie at the age of seven and brought her to Megaton. Maggie remembers nothing of her life before Megaton. A Megaton resident caught a bullet in a raider attack and Billy was given the man's house. He's been in Megaton ever since, raising Maggie as well as you can expect from a carefree wasteland adventurer, even telling her the combination to his lost safe. Of course, there are a few around town who say that Billy was the one behind that bullet that bought him his place in Megaton.[1]

Her real parents died during a raider attack in 2275. She's a friendly little girl running around the town. She appears to be interested in Harden Simms and discusses with Billy the prospect of her kissing the boy, to which Creel tells her to slow down, as she has plenty of time to do that later. She also asks Billy Creel about "the talk," stating that Harden has already had the talk.

With the Child at Heart perk, one can convince Maggie to tell them the combination to Billy Creel's safe.

Maggie appears only in Fallout 3.

The combination to the safe that Maggie gives to the Lone Wanderer is "15, 16, 23, 42" which is a reference to the numbers on the T.V. series Lost.

Retrieved from "https://fallout.fandom.com/wiki/Maggie?oldid=3368996"
Community content is available under CC-BY-SA unless otherwise noted.