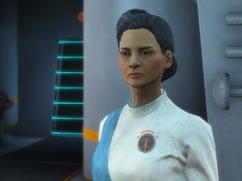 Madison Li as seen in Fallout 4

Scientific Pursuits
The Waters of Life
Take it Back!

Institutionalized
From Within
Liberty Reprimed
Ad Victoriam
Airship Down
Powering Up 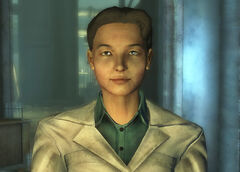 “The Enclave. They've attacked Project Purity. James is dead... there may be more. I don't know. You have to do something!”

Doctor Madison Li (Institute username Li.M)[1] is a scientist working on portable fusion power and hydroponics experiments in Rivet City in 2277. As of 2287, she is in the Commonwealth working for the Institute as the head of their advanced systems division.

Madison Li was born in 2229.[2] She was a young, idealistic scientist when she met James and fully bought into the notion of Project Purity. Madison hid her growing romantic feelings for James, respecting his marriage to Catherine.

The project was going smoothly and even had the support and help of the Brotherhood of Steel, but soon it all went downhill. Super mutant attacks were more frequent and purifying water on a large scale was much harder than first thought. After James and Catherine had a child, things couldn't get any worse for Project Purity when Catherine died and James decided to abandon the project to keep his child safe. The Brotherhood and the other scientists also left, and Project Purity was put on hold.

Dr. Li is the first distinct face that the player character sees, during the birthing scene, as she carries the newborn Lone Wanderer away while Catherine is going into cardiac arrest.

Although Madison Li was filled with sadness upon Catherine's death, her grief was replaced with a powerful sense of betrayal after James abandoned Project Purity. She headed to Rivet City, hearing about its thriving scientific community set up by Horace Pinkerton. Soon after she arrived, she began to argue with Pinkerton, as they often had different views on the matters at hand. One day, having enough of it all, Pinkerton left Rivet City and began to live in the bow of the ship. Dr. Li soon became the head scientist of the group and began to grow healthy, radiation-free produce like fresh apples and pears.

It was here in Rivet City that Madison first heard tales of the Institute, a legendary organization that was formed from the ashes of the Commonwealth Institute of Technology from a man named Zimmer, the Institutes's director of the Synth Retention Bureau.

Nineteen years after abandoning Project Purity, Madison is older, wiser and much more cynical. Her life was going smoothly, but things drastically changed when she got an unexpected visit from James, who had escaped from Vault 101 and returned to Rivet City. He tried to recruit Dr. Li in his efforts to revive Project Purity, but she refused, thinking too much time had passed. Soon after her talk with James, she meets the now-adult Lone Wanderer. With Dr. Li's directions, the Lone Wanderer locates James, who returns to Rivet City and is finally able to recruit Madison to help him. Along with several other scientists, they head for the Jefferson Memorial, the location of Project Purity.

Madison once again finds herself working on Project Purity and begins to help her fellow scientists repair the facility to operational level once more. All is going smoothly, but suddenly the Enclave arrives and quickly overruns Project Purity. A squad of troopers led by Augustus Autumn occupies the project control room, demanding that the project be handed over to them at once.

James, not trusting the Enclave, refuses to hand over the project. When Autumn, losing his patience, kills Janice Kaplinski, a fellow scientist working on the project; James sabotages the project, resulting in his death. Madison hesitates for a moment, in shock over the death of James and Janice, but then tells the Lone Wanderer that they can escape through the Taft Tunnel. Madison, the Lone Wanderer, and some other personnel escape and eventually make it to the Citadel. She speaks to Elder Lyons personally and demands that the Brotherhood of Steel take back the purifier.

After the Brotherhood defeats the Enclave at Project Purity, she tells the Lone Wanderer and Sarah Lyons that the equipment has been damaged, whether unintentionally or by sabotage. She further tells the two that the project control room is lethally irradiated, but it still needs to be activated quickly or the facility would explode.

However, the real reason Madison fled to the Commonwealth was that she feared for her very life. While Lyons had allowed her to leave unscathed, there were others who believed her to be a security risk. Knowing this information, she fled to find the Institute, the only safe haven she could think of.

After a long journey, Madison eventually found herself in the Commonwealth and quickly managed to find the scientific haven that Zimmer spoke about back in the Capital Wasteland. By joining the Institute, Madison embarked on scientific endeavors she had only dreamed of and even managed to become the director of the organization's advanced systems division.

Yet something irks Madison - most notably the lack of transparency; not getting the full story on everything that occurs within the Institute due to the organization's constant burying of facts it finds inconvenient. Li was friends with Brian Virgil. When, several months earlier, he escaped from the Institute, he was declared dead and his lab sealed off against Madison's insistence on a thorough investigation.

However, the key problem is that she feels the Institute is selfish. The technology that could improve countless lives is hidden inside the Institute, buried deep beneath the ground, yet the Institute continues to hide and isolate itself from everyone.

If the Lone Wanderer has killed Three Dog before completing the Galaxy News Radio quest, the player character will need to talk to Dr. Li to resume the plot.

Madison Li appears in Fallout 3, Fallout Shelter and in Fallout 4. Li is also mentioned in the Fallout 3 add-on Broken Steel.

Similarly to above, if the player convinces Li to join the Brotherhood but then destroys both the Institute and the Brotherhood along with the Prydwen and the airport, Li can be found standing in the Prydwen's burnt-out carcass, wearing her BoS attire and acting like she never left the Institute and the Sole Survivor was made its director.[verified] 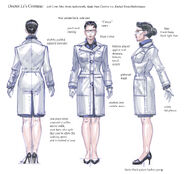 Madison Li appearing with Good Karma during the ending slides 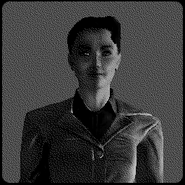 Retrieved from "https://fallout.fandom.com/wiki/Madison_Li?oldid=3289540"
Community content is available under CC-BY-SA unless otherwise noted.