“You are a "Made Man" of the (Bishop/Mordino/Salvatore/Wright) Family. You are well-known, well-respected, and look great in a fedora.”— Fallout 2 description

Made Man is a reputation title in Fallout 2.

The Chosen One gets this title by joining one of the four mafia families in New Reno and having an Intelligence above 4. For each mafia family there is a chain of quests, upon the completion special ones they can become a Made Man of that family, even as a female character. 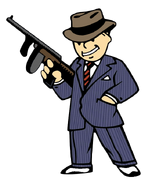