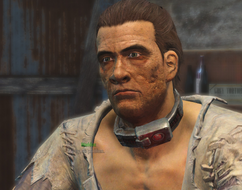 Maddox is an enslaved merchant in Nuka-World in 2287.

Maddox is a former raider who decided to quit the lifestyle after nearly dying during an altercation. Having a rough start trying to live straight and being kicked out of a few settlements prior, he eventually settled in Nuka-World prior to the arrival of Colter and the Nuka-World raiders. Since then, he has been enslaved and put to work in the market as the local chem dealer, selling staple selections and his own brewed experiments, despite no longer indulging in their use himself.

Maddox is the chems dealer in Nuka World. He provides the Sole Survivor with Calmex Silk in return for 10 bloodworm meat. Speaking to him with the meat in one's inventory will replace the "unsure" with "Give Bloodworm Meat." Once handed over, he will say he'll get to work on making "that special Calmex blend" and to check back with him later. After 24 hours, speak to him (rather than allowing him to speak to the player character) to receive 3 Calmex Silk. Next time his inventory restocks, he will have it for sale.

Maddox is noticeably more jovial and upbeat than any of the other indentured workers of Nuka-World.

Maddox appears only in the Fallout 4 add-on Nuka-World.

Retrieved from "https://fallout.fandom.com/wiki/Maddox?oldid=3249606"
Community content is available under CC-BY-SA unless otherwise noted.