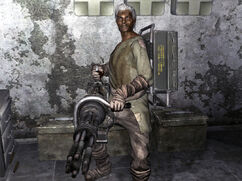 Mad Johnny Wes is a heavily armed, hostile wastelander and the only human occupant of Hubris Comics in 2277.

Johnny Wes was hemmed in by a super mutant camp, and almost savaged to death by a relentless ghoul onslaught. His mind snapped, reverting to its most basic instinct. He is holed up in the most defensible location of Hubris Comics (a foreman's office he's dubbed "the Alamo") and rigged the entire building with traps. They'll never take him alive. Never![1]

He is named after Wes Johnson, a prominent voice actor in Bethesda games, who also voices Mister Burke.

Retrieved from "https://fallout.fandom.com/wiki/Mad_Johnny_Wes?oldid=3355808"
Community content is available under CC-BY-SA unless otherwise noted.