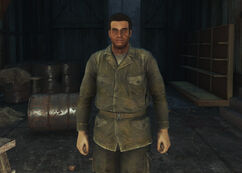 "Machete" Mike is a character living on the Island in 2287.

Machete Mike only appears during the first part of the Hull Breach questline. He is very knowledgeable about pre-War tools and takes an interest in the Pelmen power tools the Sole Survivor obtains for the Mariner.

Machete Mike appears only in the Fallout 4 add-on Far Harbor.

Retrieved from "https://fallout.fandom.com/wiki/Machete_Mike?oldid=3454785"
Community content is available under CC-BY-SA unless otherwise noted.