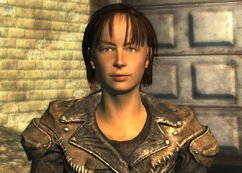 “This whole place would fall apart if it weren't for Dom and me keeping anyone from causing too much trouble.”

Machete is a junior law enforcer in Canterbury Commons in 2277.

Machete was born in 2258. One of the fiercest defenders Little Lamplight has ever seen, 19-year-old "Machete" earned her nickname at the age of 7, when she killed a mole rat in the caves armed only with a knife the size of her arm. Since then, she has been a bona fide celebrity. When she turned 16, she got disoriented in a dust storm and got lost, eventually arriving at Canterbury Commons instead of Big Town. To this day, she refuses to admit that she went to the wrong place. Dominic in particular saw her potential to provide security for the future of the camp, and after a year of his guidance, she's earned a fair amount of respect from the locals.[1]

Machete works alongside Dominic D'Ellsadro as his junior law enforcer. They both keep Canterbury Commons safe from raiders, unwanted creatures and danger in general.

Machete appears only in Fallout 3.

Retrieved from "https://fallout.fandom.com/wiki/Machete_(character)?oldid=3244197"
Community content is available under CC-BY-SA unless otherwise noted.