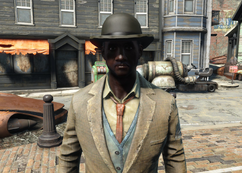 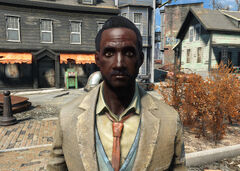 Mac without his hat

Mac is a merchant living in the Commonwealth in 2287.

Mac and his bar are a random encounter. Upon first finding him, he is talking to himself. The Sole Survivor can meet him in several random places, including close to Vault 111, Somerville Place, south of WRVR broadcast station, north of relay tower 0BB-915, Graygarden, Milton General Hospital, Diamond City and even near the deathclaw nest from The Devil's Due quest.

When the player character asks Mac why his bar is located in such an odd location, Mac responds by saying that real estate within settlements is too expensive. He says he has always wanted to own a bar since he was a little kid, a place where people can relax and tell him their troubles.

In further dialogue, he remarks that he should hire a busty waitress to gain customers, but quickly corrects himself that people are not interested in that anymore.

Mac appears only in Fallout 4.

Mac behind his bar 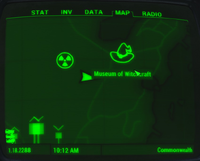 One of Mac's locations 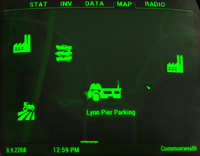 Another one of Mac's locations
Add an image to this gallery
Retrieved from "https://fallout.fandom.com/wiki/Mac_(Fallout_4)?oldid=3292555"
Community content is available under CC-BY-SA unless otherwise noted.