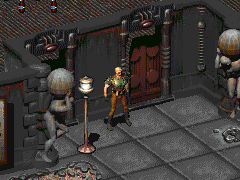 “I was thinkin the Deathclaws were the spawn of an unnatural act, but 'em Regulators are evil. Come once a month or so and they shows their ugly faces and drag a father away from is wee ones.”

MacRae is a guard who stands outside the Blades' hideout in the downtown area of the Boneyard around 2161.

MacRae is a strong Scotsman specializing in unarmed combat. He helps the Blades defend themselves, going so far as to teach them hand-to-hand combat techniques. This way, they might have a better chance against the deathclaws and the Regulators.

MacRae is a Scotsman in the same way Patrick is a Celt. They are most likely descendent from a family trying to keep its heritage alive.

In return for aiding the Blades in ridding themselves of the Regulators, MacRae promises to train the Vault Dweller in melee combat. The code does not operate as it was supposed to however (it tries to give bonuses to primary statistics), and gives no bonus whatsoever, instead of the +1 Melee Damage and +5% Damage Resistance it was intended to.[1]

When speaking to Metzger or Doc Holliday they will mention MacRae, however, in this instance they are actually referring to John Cassidy.

MacRae appears only in Fallout.

The codes to give Damage Resistance bonuses to the player character were fixed for Fallout 2, with the Dermal and Phoenix series of implants;[2] the first 'quest' interaction after the Temple of Trials (by proximity to the starting point) is a fellow tribe member, Lucas, offering to give combat training, and there were a total of four such opportunities to learn Unarmed skills for 'free' in Fallout 2, so the developers may have been eager to redress this mistake in the first game.

Retrieved from "https://fallout.fandom.com/wiki/MacRae?oldid=3365621"
Community content is available under CC-BY-SA unless otherwise noted.