The MacDougal-Bernard Company is a pre-War company based in Boston, Massachusetts.

This company purified and bottled emergency drinking water for use by the United States government and its assets, including the military. This purified water was bottled in white tin cans prior to the Great War. The bottles are now used to package clean water by merchants such as Sheng Kawolski.

The MacDougal-Bernard Company is mentioned in Fallout 4 and Fallout 76.

It is based on the real company MacDonald and Bernier located in Boston that bottled emergency drinking water and was issued by the federal government in 1953.[1] 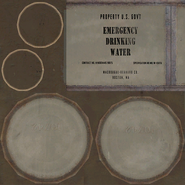