The MTA was a public transportation authority for the Boston metropolitan area, operating until the Great War.

The company managed Boston's historic subway system, built in 1897, serving as the first transportation system of its kind built in the United States.[1][2] Prior to the war, the MTA operated several train lines within downtown Boston, extending to Cambridge, Malden, Back Bay, Scollay Square, and other portions of the city. These lines included the Red, Blue, Orange, and Green lines.

Transit stations for the MTA can be found around the Commonwealth. At least one Blue Line station has been converted into a bar, the Third Rail, located within the former Scollay Square Station in Goodneighbor. Another station, Park Street, was closed by the MTA and excavated into Vault 114, where Vault-Tec would use the existing station infrastructure to build the vault to save costs. Most other stations also lie in disrepair, with the remains of trains and wreckage blocking the tunnels, and feral ghouls and super mutants, as well as raiders, taking residence in the concourses and platforms.

The monorail initiative was reported as being funded by Boston crime families, such as those led by Eddie Winter and Sal Barsconi. Winter's response to a newspaper article by the Boston Bugle, "Heaven's Highway - Devil's Doing," about the ties of organized crime to the project was to threaten the reporter who wrote the article and order the murder of Safety Inspector Alice Lansky.[3]

A second track runs by Outpost Zimonja at the northern edges of the Commonwealth, heading southwest through the same Lexington interchange and eventually into the Glowing Sea. No stations can be found along the second track, though the wreck of a monorail can be found south of ArcJet Systems.

MTA is a reference to Massachusetts Bay Transportation Authority, formerly known as the MTA in Boston. 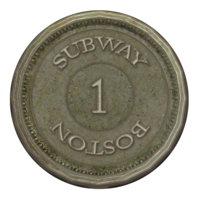 Subway token used by the MTA