The MS Azalea is a location on the Island in 2287.

The MS Azalea was a coastal freighter traveling along the U.S. Atlantic coast when the bombs fell. Although the exact reasons are unclear, the ship ended up beached on the Island's southeastern shoreline. Today she still rests in the same spot - heavily rusted, decaying and split into several pieces.

The wreckage of the large container ship is now inhabited by trappers. A part of the hull can be secured to reinforce the Hull - Far Harbor's outer wall - through the quest Hull Breach.

The trappers have built numerous platforms around, inside and on top of the ship. The MS Azalea can be entered by swimming onto some of the trapper's platforms from the ocean or by crossing over a walkway onto the top deck when approaching the place from the land. The top deck is a maze of containers and shanties. A set of stairs leads into the interior of the ship, which is like a large cavern filled with more trapper shacks on platforms above shallow water.

The MS Azalea is inhabited by around 15 trappers including Bilge, their power-armored leader.

The MS Azalea appears only in the Fallout 4 add-on Far Harbor.

There are some graphical issues with the MS Azalea, like the top deck appearing to be flooded although that is actually just the result of glitched textures. Since these cover the floor as well as the superstructure's walls, they tend to conceal every door and stairway on the top deck, thus making it hard to find an entrance into the hull. This can typically be fixed by saving and restarting the game. [verified]

Bow of the ship

The barge floating next to the MS Azalea

A nice art installation with an anchor near the ship

Ship name on the side 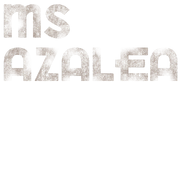