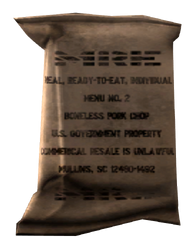 The MRE is a consumable item in the Fallout: New Vegas add-on Lonesome Road.

The MRE (abbreviated from "Meal, Ready-to-Eat") is a highly nutritious field ration for use by United States Armed Forces servicemen in combat and field conditions where organized food facilities are not available. The main meals in the pouch come pre-cooked in "boil in the foil" packets that can be warmed by immersing them in water that activates heating cells in the MRE pouch. MREs were first issued in 1981 on a limited basis and finally replaced the older canned rations when stockpiles were used up in 1986.

Military individual field rations were used by the United States Army and are found extensively in the area surrounding the Divide. The MRE contains boneless pork chop as the main course along with standard sundries. This food item is one of the few radiation-free foods in the game, and its nutritional value in hardcore mode is among the highest found in any food, on par with the much heavier caravan lunch.

Retrieved from "https://fallout.fandom.com/wiki/MRE?oldid=3324715"
Community content is available under CC-BY-SA unless otherwise noted.