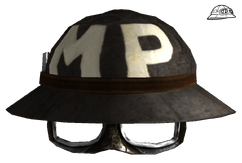 The MP trooper helmet is a piece of headwear in Fallout: New Vegas.

A version of the standard trooper helmet issued to NCR military police, it has a dark blueish black paint job with the letters MP marked on the top in white paint.

According to Brian Menze, who made the concept for the Ranger, he "used a pith helmet for the design"[Non-canon 2] when he was putting the outfit together.