Developed by Doctor Aldwin Morley 14 years before the Great War, as a secretive prototype to the Enclave’s plasma pistol, this prototype plasma pistol also proves a conspiracy theory suspected long before the War.[1] At the time, concern was focused on energy cell drain and weight problems caused by the coolant coils, but resulted in the frame being approved and used for the final design.[2] Shortly after, it was stolen from the conspiracy by an organization called Quaere Verum, but was buried in a safe in a desert after being revealed to the Enclave by Morley, who had been posing as a double-agent and allowing the group to steal the Novasurge prototype before prompting Enclave agents to exterminate the group.[3] The pistol was later taken by aliens who brought up both the safe that contained the gun and the computer terminal required to remotely unlock the safe.

The weapon acts very similarly to the plasma pistol it formed the basis for, barring several prototype features. First and foremost, this weapon does more than three times as much damage as the regular plasma pistol and has a higher critical multiplier (3x as opposed to 2x). However, it uses two energy cells to power each shot and weighs twice as much as the normal plasma pistol, almost as much as an R91 assault rifle.

The weapon is found in the cargo hold area of Mothership Zeta. In one area is Reid Underwood's terminal (Hard), which can be hacked to unlock a safe. To get to the terminal, go to the research lab door, go north then a bit east, and one should see a group of terminals. It will be the only one that isn't broken. The safe itself is found in another area among several piles of rubble, next to a machine that is dropping items into a pit. Inside the safe is the weapon, a note detailing the weapon and energy cells (amount may vary due to the Scrounger perk).

The cargo hold becomes inaccessible after teleporting to the bridge, making it impossible to obtain the weapon afterwards. 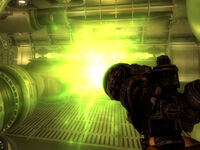 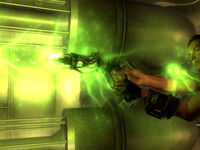 Cite error: <ref> tags exist, but no <references/> tag was found
Retrieved from "https://fallout.fandom.com/wiki/MPLX_Novasurge?oldid=3105525"
Community content is available under CC-BY-SA unless otherwise noted.