The weapon is found in the cargo hold area of Mothership Zeta. In one area is Reid Underwood's terminal (hard) which can be hacked to unlock a safe, to get to the terminal go to the Research lab door go north then a bit east you should see a group of terminals, it's the only one that isn't broken. The safe itself is found in another area among several piles of rubble, next to a machine that is dropping items into a pit. Inside the safe is the weapon, a note detailing the weapon, and energy cells (amount may vary due to the Scrounger perk). 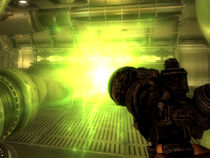 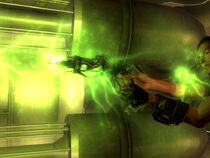 Add an image to this gallery
Retrieved from "https://fallout.fandom.com/wiki/MPLX_Novasurge?oldid=2270804"
Community content is available under CC-BY-SA unless otherwise noted.