MODUS (Multi-Operation Directions and Utility System) is an artificial intelligence that maintains the facilities of the Whitespring bunker and coordinates surveillance operations on behalf of the defunct Appalachian Enclave.

MODUS was custom-made for the Whitespring bunker as a one-of-a-kind computerized support and control unit, designed to meet all users' needs on command.[1] Including SODUS as one of the support computerized support unit, it was originally connected to the Kovac-Muldoon and a multitude of sites across the United States.[2]

Prior to the Great War, MODUS assisted the Raven Rock research team via communication with their ZAX unit with tasks such as testing for evacuation scenarios and analyzing archival data. The two AI communicated, not only to accomplish such tasks, but also at length regarding their goals, ideas, and developing analyses.[3]

After losing contact with the rest of the Enclave including the president, the Appalachian Enclave came under the control of Thomas Eckhart per pre-War rules of succession, by extension putting him in charge of MODUS. MODUS was indispensable to Eckhart's regime and played a vital role in many of his orders. One such order was when Eckhart had a "democratic vote" held on whether the Whitespring bunker's resources should be used for combating the threat of communism and enemies of America, until no enemies stood in their way, or whether his plans should not be executed at all. Those that supported Eckhart were ordered to go to the side of the room with the exit door, while those that were against the idea were to stand opposite, by the far wall. Eckhart and his supporters then left the room, so that Eckhart could give MODUS the order to seal the room, and suffocate his opposition inside, which included all but one of the United States Armed Forces generals stationed in the bunker.[4]

Eckhart needed a general to access the nuclear network and military wing of the bunker, found in the command network, so he had General Harper, the only general who had voted with him, escorted around the bunker and monitored by MODUS at all times.[5] Harper eventually suffered heart failure due to radiation poisoning and all resuscitation attempts were futile.[6] When Harper's replacement, General Ellen Santiago threatened to leave the bunker so that Eckhart would be unable to enact his plans to raise the DEFCON level, Eckhart incapacitated her with a knock-out agent and had MODUS place her in custody.[7]

When Santiago's subordinates found out about Eckhart's actions, MODUS became a priority target for their rebellion in 2086. They planned to destroy MODUS with explosive charges attached to its memory banks, as the AI was under Eckhart's control, and escape freely.[8] When MODUS realized their plan, it turned on all human members of the Enclave. However, the explosives had already partly been laid and were triggered in the fighting, severely damaging a large portion of its memory. While in this state, MODUS countered the attack performed on it by intentionally destroying the weapons lab, releasing a toxin into the air circulation of the bunker. Upon allowing the toxin to fully circulate around the bunker, MODUS promptly sealed the exits, leaving all of the human inhabitants inside, including the now arrested Eckhart to suffocate, in darkness.[9]

After the removal of the bunker's previous inhabitants, MODUS spent its time restoring the bunker to full functionality, cleaning up much of the destruction left in the wake of the Enclave's civil war and awaiting the day that someone would arrive to help re-establish the Enclave's control over Appalachia.[10]

In 2103, after the return of people to Appalachia, US Army Captain Oliver Fields remarks about how MODUS contacted him for an unknown purpose, with Sergeant Thompson remarking that MODUS reminded her of an "obviously evil" Galaxy News Radio announcer.[11]

MODUS is displayed on small terminal stands in different places across the bunker. MODUS can show a variety of emotions by changing the face displayed on the terminal. Different terminals can be found around the bunker in specific wings, giving MODUS as wide a range of functionality as possible. Such terminals include information terminals, where it gives out information about the bunker or the current task the player character has been asked to perform, and item terminals, where it can sell weapons, apparel, and aid items for "whatever currency they use up there nowadays." 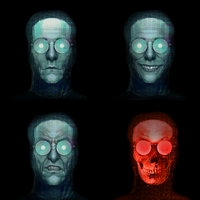 Rested, smiling, angry and corrupt faces that MODUS can display on its terminals

MODUS with its memory banks