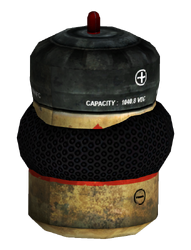 The MFC grenade is a thrown explosive in the Fallout: New Vegas add-on Gun Runners' Arsenal.

The MFC grenade is a powerful improvised weapon, created by converting three microfusion cells into a thrown explosive device. It has a wide blast radius and similar visual effects to a plasma grenade.

This weapon can only be created by choosing the Mad Bomber perk. It can either be directly crafted, or the player character can gain up to six by recovering the individual mines of an MFC cluster. It cannot be found on enemies or in containers.