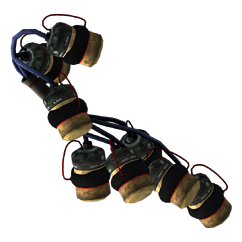 The MFC cluster is a weapon added with the Fallout: New Vegas add-on Gun Runners' Arsenal.

The MFC cluster is a powerful improvised explosive weapon. It is essentially six independent MFC grenades wrapped up together and rigged to explode like a mine. In keeping with this theme, the MFC cluster requires six times as many microfusion cells as one MFC grenade. When used, the player flings all six of the mines at the same time, which then separates into six different projectiles. The mines bounce off surfaces when thrown, and can cover a large distance very quickly by ricocheting.

Note that while in many respects the weapon is a placed weapon (for example, it cannot be used in V.A.T.S.), the distance that the individual mines travel is quite far, and exceed that of common mines (such as the bottlecap mine). Therefore the MFC cluster can be utilized as a low-range throwing weapon.

Mines that have not detonated can be disarmed and added back into the player's inventory as six separate MFC grenades. In reality, it would be possible to lose one or more of the grenades after they separate and subsequently fall. The MFC cluster is an improved holdout weapon and stands as the most powerful as such in terms of damage per second.

This weapon must be crafted by the player. It cannot be found on enemies or in containers.

Joshua Sawyer stated in October 2020 that the MFC cluster was his favorite weapon to design from Fallout: New Vegas, as they were very silly and testing them and "goofing around with them" made him laugh.[1]