The MDPL-21 power station is a location a short distance east-northeast from SatCom Array NN-03d, in the Capital Wasteland in 2277.

This power station is secured by fences and a locked gate. Unlike some other power stations, the power substation here is accessed via a garage door. Found along a gentle slope rising northward, it is flanked by rocky cliffs to the east. The small compound consists of a substation building, along with six transformers. An opening located to the northeast leads to Oasis.

The MDPL-21 power station appears only in Fallout 3. 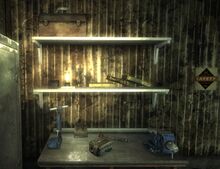