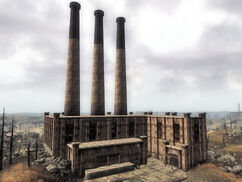 The MDPL-13 power station is a large derelict power plant in the mid-northeastern portion of the map. It is located midway between the Germantown police HQ and Greener Pastures disposal site. The closest location is Minefield, south-southeast from the power station. Its 3 tall chimneys are visible from much of the Capital Wasteland, making it a prominent landmark.

The power station complex is comprised of an abandoned power plant and a power substation. The derelict power plant is accessible via a double-door or the garage door. If accessed via the double doors, the player will enter the office with a desk, several file cabinets, and two vending machines. The office door accesses the room with the three chimneys.

Inside, there are ghoul-type enemies and an originally dormant Mark VII automated turret mounted on the ceiling of the main hall. This turret can be activated using the terminal in the small entrance room, destroying the generator will disable it. It will be hostile to anyone and cannot be attacked by the unarmed ghouls, effectively clearing the whole location.

The room on the second floor is accessible via the catwalk under the turret and has a locked floor safe. The terminal for the safe is on the desk. If the plant is accessed via the garage door, there will be several lockers and one locked personal footlocker. The door beside the lockers leads to the large room with the three chimneys. The power substation has a workbench with ingredients required for a Nuka-grenade lying around, as well as a bottlecap mine. Also on the workbench are a set of railway rifle schematics. There are several patches of minor radiation in all parts of the building.

The MDPL-13 power station appears only in Fallout 3.

Fisto!
Add a photo to this gallery
Retrieved from "https://fallout.fandom.com/wiki/MDPL-13_power_station?oldid=3501377"
Community content is available under CC-BY-SA unless otherwise noted.