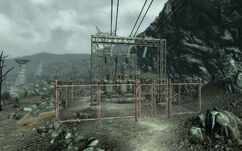 Above the MDPL-05 power station.

The MDPL-05 power station is one of many power stations located in the Capital Wasteland. It can be found on the fault-block mountain in the far reaches of the northwest corner of the map, southeast of Raven Rock and north-northeast of SatCom Array NW-07c.

The power station is secured by fences and two locked gates, but the fence along the mountainside is knocked down, allowing access. Inside the fence lay skeletal remains, the "workman's" toolbox, a wrench, Nuka-cola, dart gun schematics and a Dean's Electronics skill book. On the road to the power station from a bridge, one can find all the components needed for a railway rifle.

The MDPL-05 power station appears only in Fallout 3.

Dart gun schematics and Dean's Electronics
Add a photo to this gallery
Retrieved from "https://fallout.fandom.com/wiki/MDPL-05_power_station?oldid=3265890"
Community content is available under CC-BY-SA unless otherwise noted.