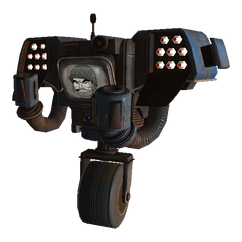 The M-235 missile launcher is a non-usable weapon in Fallout: New Vegas.

The name of the weapon is mentioned by Mr. House in The House Always Wins I quest.

Retrieved from "https://fallout.fandom.com/wiki/M-235_missile_launcher?oldid=3127792"
Community content is available under CC-BY-SA unless otherwise noted.