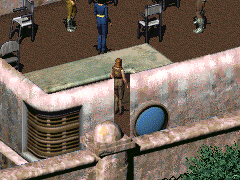 Deliver beer and booze (10 each) to Lydia

“That's for sure. I used to have a... well, I used to know this merchant who had a bottle of Maddog 30/30. Bitter stuff...couldn't feel my tongue afterwards, but it was refreshingly different.”

Lydia is the owner and proprietor[1] of the Tap House in downtown Vault City in 2241.

A brown-haired woman dressed in brown fatigues and metal armor,[2] Lydia would fit right in with Vault City guardsmen, but she prefers running her bar and serving those who come to the city. Due to city laws, she is prohibited from offering actual alcohol on the premises, with the selection limited to synthesized liquors provided by city machines: Synthetic beers and liquor, such as vodka-H or tequila derivatives W and W2. For those who don't like them, there's always purified water and brahmin milk.

That's not to say Lydia follows the laws like a good Citizen. While she does have citizenship, she is aware of the slavery going on within the walls[3] (though she doesn't criticize; in fact, she employs Servants in her establishment) and she disagrees with the prohibition on alcohol. Perhaps the bottle of Maddog 30/30 she tasted with a merchant in the Courtyard left her with a lasting impression.[4]

This however isn't the only manner to which she, less than enthusiastically follows the law. If the Chosen One tries to flout a fack citizenship she will inform the Chosen One that she knows full well, not only that it is fake, but that Skeev was the one whom sold it. Although well informed of her home she is ignorant of the wider wasteland, apart from the towns that directly trade with Vault City on the Big Circle.[5][6][7][8][9][10][11]

Lydia appears only in Fallout 2 and is mentioned in the Fallout Bible.

Lydia is one of the multitude of characters that breaks the fourth wall after the player completes Fallout 2.[12]

Retrieved from "https://fallout.fandom.com/wiki/Lydia_(Fallout_2)?oldid=3345384"
Community content is available under CC-BY-SA unless otherwise noted.